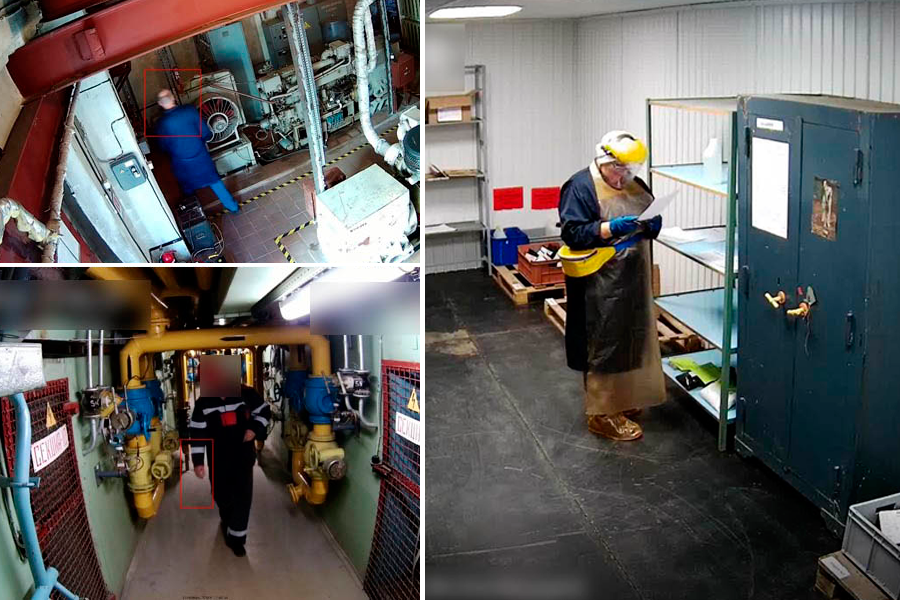 HOLD ON TO YOUR HARD HATS: NEURAL NETWORK WATCHING OVER YOU AND 20 TYPES OF PPE YOU MAY HAVE

Is there a way to make sure that workers actually wear and use personal protective equipment (PPE) at hazardous production facilities? No big deal. Just train a neural network to recognize if PPE is on workers all over the facility, and then prevent accidents. How to do so? That’s what our today’s post is about.

Is standard CCTV system effective? There are ordinary people behind the cameras, getting tired, distracted, having momentary lapses in concentration that could prove fatal for workshop personnel. The good news is that progress comes to save the day. A properly trained artificial intelligence detects safety practice violations at once and in no time alerts a worker, one way or another, e.g. with a sharp sound, vibration, or SMS.

We trained AI-based video analytics to monitor safety compliance in the workplace in multiple ways:

We called this platform for workplace accident prevention “Digital Worker“, and its video analytics tool can detect:

How does a Digital Worker IoT platform count people and know a worker’s job? It does so by means of digital differentiation, capable of seeing the color of safety wear or hard hat on a worker as one of the ways. Let’s take a drilling site for example, where each hard hat color depends on the job. Blue hard hats are worn by drilling engineers, green is found on heads of drilling supervisors, and so on. The site can have color video cameras. The number of hard hats counted in real time is equal to the number of workers. Each camera covers a specific area of a drilling site. At the end of the day, all this data is consolidated to make a schedule for every area, showing what workers did the job, how many of them and in what area.

The system recognizes dangerous situations and notifies the operator about them. So, it is forbidden to be near the drilling rig when it is in working condition. In case a worker comes closer to the forbidden area, camera notices it and sends an alert.

The system also reacts when foreign objects prevent machinery operation. This picture shows how an animal is detected on the production line:

Can you trick a neural network? Let’s say, a worker fastens a hard hat to a belt. What is going to happen? In the case like this, two detectors are involved to find a bone structure, check whether a color spot is on top of it, and look for objects that move in sync. Therefore, a hard hat on the belt will hardly “look around” a person, because to do so, it should be on the head that moves in a certain way. Such a move can be easily detected, so tricksters are caught on their way to break rules.

What else can a neural network see?

Digital Worker platform is a mix of IoT and AI technologies and tools for industrial enterprises and construction companies developed to ensure employee safety and improve performance with a focus on minimizing the number of accidents, preventing fraud and safety violations.

TRY FOR MY BUSINESS