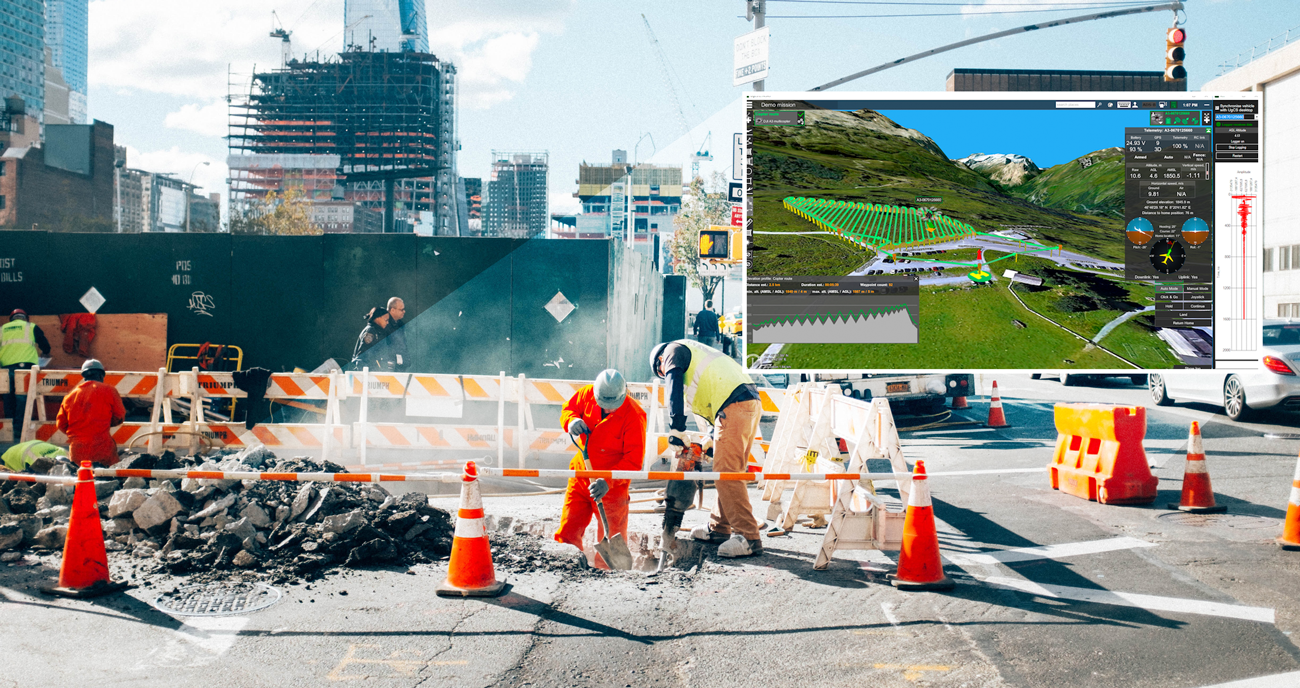 What’s usually attached to a drone? A video camera, of course. It is quite popular to mount it on the drone and lift as far above the ground as the connection reaches and catch a panoramic breathtakingly beautiful view on that camera. This is, however, a mere 9% of what you can do with this machine. Besides, there are a lot more interesting toys to mount on drones, and, in today’s post, I’ll tell you all about drone sensors.

Sensors. There are a great many sensors one can attach to drones. You can give them a keen magic power to see things and solve business problems faster, and I’m excited to share the most impressive cases with you: oil spill detection and ground penetrating radar (GPR).

This drone sensor is a specific type of a thermal imager (looks like a tiny cube with an opaque black mirror lens) that can measure polarized light. Taking light as a form of an electromagnetic wave, we can distinguish electric and magnetic fields there. Before polarization, we have unpolarized light emitted, for example, by the sun or a lamp. Polarization means removing any electromagnetic waves from the beam, except for those being in a certain plane of polarization. Light reflected from oil and water has different polarization angles. Gotcha! Now you see it.

An on-board computer connects the drone and the sensor and processes data in real time. The camera receives two video streams: thermal radiation and the polarized (reflected) light in each pixel of the image. Both streams combined to allow for detecting hydrocarbons on the water surface (gas, diesel, oil, and kerosene).

Here is my recommendation regarding the best drone for such an industrial inspection. The choice, however, depends on the environment. For example, a kilometer-long and 0.5 kilometer-wide coastline inspection is a job for DJI M-200 and M-300 drones. If you need to monitor an area of at least 10 by 40 kilometers, then consider flying machines that look more like planes, as they can stay in the air longer (3-6 hours) and travel farther.

If a refinery is tasked with tracking oil spills in its waters, this sensor will be an essential asset, being able to detect the tiniest spills right away and avert a disaster. In addition, this sensor is more user-friendly than bulky marine radars and its polarization camera sees oil spills in calm waters, unlike the radar. Finally, you can schedule drone flights around the area to get updates on the state of the water around the production area.

Loosely speaking, GPR is a radar that can see underground. This drone sensor has a couple of commercial applications.

One of the most common and practical use cases is to locate pipes and other utility lines in urban areas. City development usually takes time and not always sticks to an initial plan, like in case of underground utility systems. Reasons differ. The original drawings could be lost and then recreated from memory or georeferencing wasn’t around until quite recently, while works were carried out some 30-40 years ago. Anyway, it’s a common thing when a drawing says that a water pipe is under the sidewalk, but, in fact, the pipe runs three meters away from there under the road.

Such discrepancies greatly complicate the planning of utility systems repair or installation. Just fancy that you need to lay new fiber-optic cables in an old city. You take the drawings, study them, and decide to lay a new pipe under the roadway. There you are: the traffic is blocked, roads are closed, concrete is broken up, and workers are digging. Two months and thousands of cubic meters later, they hit the pipe. To say it is a surprise might be an understatement.

GPR drone sensors can save you from such an oopsie. It detects the reflected signals from subsurface structures, but the material must have enough density to reflect these waves. I’ll give you an example. We are trying to survey a sandy area. There is a pipe two meters beneath the surface. The sand is quite transparent for radio waves. Having reached the pipe, the radio wave is reflected back to you, so the GPR can receive it and show you the location of the metal material under the sand. However, you won’t see anything under the pipe, because the radio wave has already been reflected back. Clay, metal, reinforced concrete and water (especially soil and salt water) reflect waves well. This radar is especially useful when you look for a perfect site to build a skyscraper.

There are high and low-frequency GPRs. The higher frequency, the more detailed image, but the less the vision depth is. In other words, at a higher frequency, you will see smaller objects more accurately. For example, a 100 MHz GPR will show you a metal pipe being one meter in diameter and laid three meters underground. But it will be blind to a pipe with a diameter of ten centimeters – such a small object requires a radar of higher frequency. However, depending on the ground, low-frequency GPRs can locate objects at the depth of 30, 40, and even 100 meters. SPH Engineering, for example, discovered a whole plane in a glacier in Greenland buried 130 meters under ice, which is made of distilled water and thus remains transparent for radio waves.

Drone sensors – a tool for every job

You can select a perfect sensor for the job when you set the objectives. Say, you need to find a metal object under the layer of the salt sand that doesn’t allow waves through. Use a magnetometer. If so required, you can put an ultrasonic sensor to use. But that’s another story to tell sometime later.

To conclude, technologies have a wide range of applications to solve any task of any complexity. Think out of the box and you’ll find the way.

TRY FOR MY BUSINESS